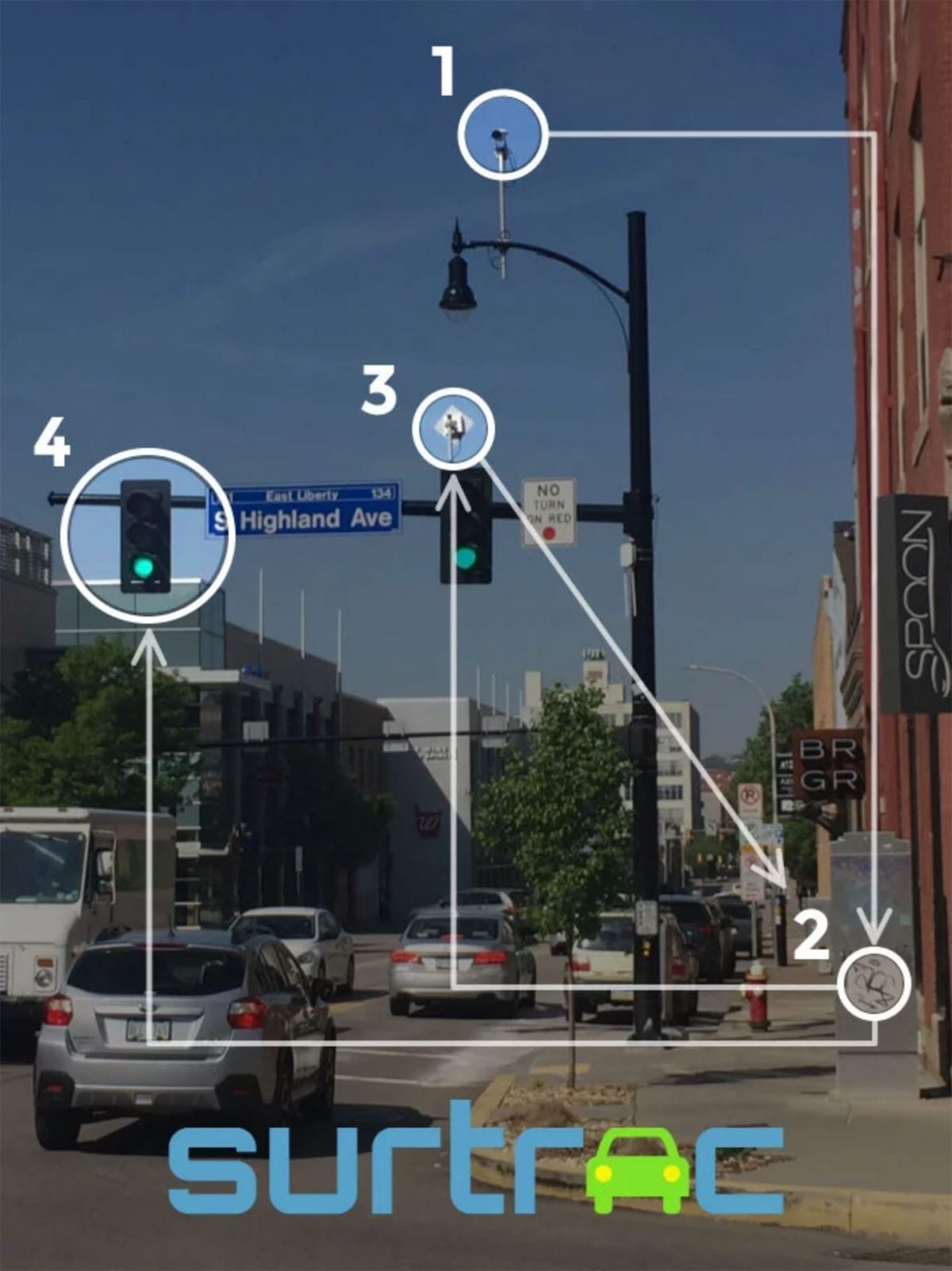 Artificial intelligence is giving more Pittsburgh drivers the green light.
Developing and deploying the technology to keep the traffic flowing took a team of researchers and roboticists from Carnegie Mellon University together with the help of city engineers and funding from foundations.

It all started because Henry Hillman, the late Pittsburgh business leader and philanthropist, was frustrated with traffic signals that wouldn’t turn despite a lack of traffic. In 2009, he reached out to then-CMU president Jerry L. Cohon, to promote the idea that Pittsburgh could be used as a test bed for transportation systems. Not only could it help make traffic move more smoothly, but technology could be developed and spun off, thereby creating more jobs in Pittsburgh.

Their conversation became the impetus for CMU’s Traffic21 Institute, a multidisciplinary research institute with the goal to design, test, deploy and evaluate information and communications-technology-based solutions to address transportation problems. The center is directed from CMU’s Heinz College of Information Systems and Public Policy.

“We don’t have a transportation department, but we looked around and identified that there were faculty doing work across the university in transportation,” said Stan Caldwell, executive director of CMU’s Traffic21 Institute.

As one of its first initiatives, Traffic21 distributed grants for a dozen pilot projects to address transportation issues that could be solved with external partners. The seed money was provided by by The Hillman Foundation with along with additional support from The Heinz Endowments’ Breathe Project and from the Richard King Mellon Foundation.

Surtrac, an intelligent traffic signaling system, was one of the pilots.

“We focus on problems where no one agent is in charge and decisions happen as a collaborative activity,” Smith said. “It seemed like a natural application to apply to traffic lights.”

Software allows the signals to “talk to each other.” Each signal makes its own decisions on timing by sensing approaching traffic streams and generating a timing plan to optimize movement through intersections. The signals then share plans with neighboring signals to create coordinated actions.

The system employs artificial intelligence to coordinate traffic lights based on traffic conditions, which improves traffic flow and reduces average travel times by 25%. And as cars spend less time idling (up to 40 percent), air pollution from emissions is reduced as well.

The project began in 2012 with nine intersections in Pittsburgh’s East Liberty neighborhood. At the time, the older neighborhood was experiencing congestion in part from larger, newer stores such as Home Depot, Target and Whole Foods, and Google had just moved into Bakery Square nearby. The area was equipped with new traffic signals that included cameras with actuation and fiber optic cables that connected the signals.

“The East Liberty Development Inc. was a great partner that said ‘Yes, we would love to have this demonstrated in our neighborhood,'” Caldwell recalled.

Hillman praised the project when the first lights were installed in 2012.

“This type of technological breakthrough is just what we hoped could happen when Traffic21 was created with a broad community partnership led by CMU,” Hillman said.

Smith licensed the technology to create Rapid Flow Technologies, has commercially deployed Surtrac in four cities beyond Pittsburgh, and is installing signals in two Canadian municipalities by the end of the year.

“If you look at Pittsburgh, what you see is an urban lab. It’s a place where research and development is happening within our public rights of way.” — Pittsburgh Mayor Bill Peduto

Locally, 50 intersections, or 15 percent of the total in Pittsburgh, have been equipped with the smart system.

“This project epitomizes the Traffic21 research, development and deployment model that connects community partners to innovative research happening at the university,” Caldwell said.

A new exhibit at Pittsburgh International Airport showcases the partnership between Carnegie Mellon and the city that explains the benefits of smart traffic lights. Surtrac is just one of the ongoing collaborations between the university and Pittsburgh.

“If you look at Pittsburgh, what you see is an urban lab,” said Pittsburgh Mayor Bill Peduto. “It’s a place where research and development is happening within our public rights of way.”

Caldwell said that Traffic21 has helped improve life for residents, transform Pittsburgh’s image as a smart city and has created companies with more than 200 jobs in Pittsburgh to feed a whole new ecosystem of smart transportation-related industry.

CMU’s Metro21: Smart Cities Institute expands on the work that Traffic21 has done and takes a forward-looking approach to bringing people, technology and policy together to improve the quality of life for metropolitan area citizens. The work of Metro21 provides a global model for innovative future cities. Metro21, in turn, took the Pittsburgh/CMU model of research, development and deployment and founded the MetroLab Network, which launched in 2015 as part of the White House’s Smart Cities Initiative and spun out of CMU in 2018. Today there are more than 45 city-university partnerships modeled after the success CMU and the City of Pittsburgh.

In 2016, Traffic21 worked with the city of Pittsburgh on the U.S. Department of Transportation Smart City Challenge. Pittsburgh was named a finalist and was awarded an Advanced Transportation and Congestion Management Technologies (ATCMTD) grant for $10.8 million from the U.S. Department of Transportation. The city is looking to add an additional 150 intersections of smart traffic signals beginning in late 2020. Rapid Flow Technology will be among the firms competing for the project.

“Pittsburgh is going to have a citywide smart and connected signal system that will make it more efficient, but a lot of other things have happened simultaneously to make the city an international leader,” Caldwell said.

Among those initial dozen pilot programs, included the early beginnings of ParkPGH, Tiramsiu and Roadbotics.

The world is noticing. In 2017, Le Monde, a Paris-based newspaper, recognized Smith with a Le Monde Smart Cities Global Innovation Award in the mobility category. Surtrac was the only U.S.-based winner selected by an international jury of urban planners, sociologists, journalists and innovation experts.

In the future, connected infrastructure will enhance safety and mobility for human-driven and self-driving vehicles alike.

Smith said as vehicles become equipped to communicate directly with the traffic signals, additional data can be shared with traffic signals to create even more efficiencies. Because Surtrac models and optimizes actual traffic flow, it can directly take advantage of any additional information vehicles can provide. The connected infrastructure will enhance safety and mobility for human-driven and self-driving vehicles alike.

“Imagine a future where everything is connected,” Smith said. “Where we look at direct and continuous communication about where vehicles are, how fast they are moving and what direction they are heading.”

Smith said this future is still decades away when all vehicles are equipped. In the shorter term, there are still benefits to be had from the use of connected vehicle technology. For example, freight companies know their routes throughout the city. If fleets are equipped the ability to communicate, smart traffic signals could optimize their routes. Ride-hailing companies could optimize their routes as well to carry more passengers.

“Many travelers routinely follow routes produced by navigation apps like Google maps or Waze and if a vehicle is willing to share this route with Surtrac, then we can move them faster through the intersections along this route and do so without adversely affecting vehicles that are not sharing this information,” Smith said. “It sounds magical at first, but really you’re just giving us more information and reducing uncertainty so we can we do a better job at optimizing the signal timings.”

Smith’s team is working to equip Port Authority of Allegheny County buses with radios that communicate with Surtrac signals to better predict arrivals and to give buses priority when appropriate.

Additionally, his team is working with the Federal Highway Administration on a mobile app to assist pedestrians with disabilities. The app communicates directly with the Surtrac system and indicates how much time its user needs in order to safely cross the street. The system also lets the person crossing know how much time is left before lights change.

“We’ve just completed a series of user tests with invited people to come out and try it and give us their feedback and such,” Smith said. “It’s really positive. They are overwhelmingly providing good feedback.”